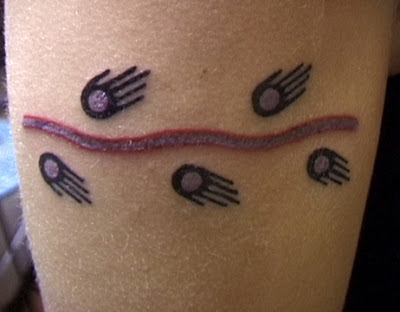 We have been silent mainly due to traveling to the North American Embassy of Anaphoria Island. While on the street we ran across someone with a tatoo ( yes it is real) of the Anaphorian Flag. Before we left we found this person a good position in the Los Angeles Branch
Posted by Kraig Grady at 3:05 PM 1 comment:

Email ThisBlogThis!Share to TwitterShare to FacebookShare to Pinterest
Labels: Tatoo, visit to LA

An Appeal For An Appropriate Language in Musical Papers.

In recent months, I have enjoyed the experience going through the periodicals in a Library. The pursuit? What are human beings interested in its quest for knowledge and to what extent. Who would have known that so much of Geology would be preoccupied with Sedimentology? Who would have known that Timothy Leary was writing academic papers in the 90’s that are indistinguishable from his colleagues, except perhaps by the subject matter? Many (admittedly most) of these periodicals are impenetrable and impressed upon me the impossibility of what was once referred to as a renaissance man and need to add woman. The specialized nature spawned from the depth of each subject has made the inventory beyond what any of us even if it was a full time job with the worst of long hours. One wonders if it is in the future for a cross discipline interaction of say three subjects, even if they met, might not be beyond us because of the language each uses. And if we can, what language might be sacrificed in the process. Perhaps we cannot escape this entropy, and by that I do not mean a homogenous randomness, but many irreconcilable “orders”. Can we escape such a tower of Babel?

One still learns something even if one is over their head. One is how each subject uses and develops a language that can make even the Table of Contents daunting. Often though, I would be struck by some turn of phrase, some flow of words that seemed, almost poetry. Some subjects, certain words are accented in a beautiful way and others react with the meanings in my own ‘specialization’. Perhaps in a worse case scenario, with such a gesture they might at least ‘touch’ each other. It was Joyce who said, “Gesture is the universal language”. Still science especially hopes for more.

Finally I got to familiar ground (or so I thought) with the music periodicals. To its credit, the styles and use of language varies greatly. Still there were those, or various authors whose style one cannot tell from some of your more scientific papers. You don’t find this with visual art (the worse of double talk and a subject I will spare you from going on at length), poetry, dance or theater. In fact, it is the only art where you find such things. It is true that music has its relationship with math, but to sacrifice most traces of what is one might identify, as ‘musical language’ is inappropriate. Music is closer to the other arts, and I think it should reflect that. Science perhaps sees art as one of those areas that resist it most, but if ever if it could make it territory (which I surely doubt), the subversion of art’s dialog is underhanded. It may even in the future put forth what it deems art for the mere purpose of preventing art from happening, but will find it difficult to hold this ground.
Posted by Kraig Grady at 8:58 AM No comments:

Review Berlin show in The Wire

http://anaphoria.com/WIREreview1.jpg
Posted by Kraig Grady at 8:20 AM No comments:

Email ThisBlogThis!Share to TwitterShare to FacebookShare to Pinterest
Labels: Berlin, review, The wire

time to banish
that superficial five
gimme
essences of our experience

as weight or depth
stays color/harmony
emotion
defines more than