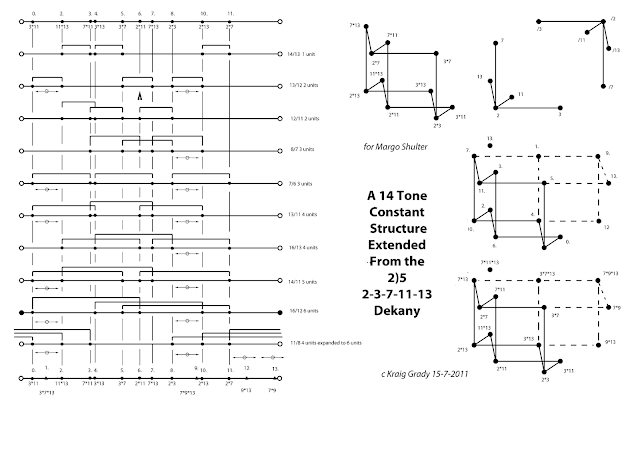 As a prelude let me say not to worry. I will tell you what a Dekany is , and yes somehow I have come up with quite a few 14 tone scales, in fact more than any other number.

The harmonics 2-3-7-11-13 as a set have raised some interest. George Secor and Margo Schulter, are just two important microtonal theorist who have seen interesting possibilities in them. While the former sees it as a bedrock for harmonic development and is interested in scales that can accommodate them as in this paper of his. The latter, Margo Schulter is interested in this set as the basis to explore her neo-renaissance/neo-gothic approach to music since these harmonics are the basis of the Persian scales of the time.

Margo had recently posed the question about how these harmonics might also be developed into scales that include the non-tonal centered harmonics structures of Erv Wilson's called Combination Product sets, or CPS for short. These structures provide a gateway into a somewhat 'atonal' or perhaps 'pantonal' environment while retaining relatively simple consonances. The interest is in adding to the language of this period before tonality would take such a strong hold.

The simplest CPS we can form of these is the 2 out of 5 Dekany. The Dekany is a 10 tone structure that takes the combination 2 out of 5 elements at a time and multiplies these together. [2*3, 2*7, 2*11, 2*13, 3*7, 3*11, 3*13, 7*11, 7*13, 11*13]. You can download the chart above or a larger one here to see how one can map it out on a lattice. Now while this give us a wonderful harmonic set, there is a great advantage in going one step further and trying to find what is called a Constant Structure. This is a structure where each times ratio occurs in such a scale, it will be have the same number of notes in between. [We find this property in the pentatonic scale on the black notes, in the diatonic and in the 12 tone scale for instance] Now this Dekany does not have this property on its own and the chart shows how I solved the problem and ended up with a 14 tone scale.

I preserved on the left half shows the steps it took to solve [in case one wishes to do so with any set that might interest one.]

First one arranges the main intervals from smallest to largest possible with the harmonics one is working with.  This coincides with the series one sees running down the right hand side in the left half of the chart.

While 14/13 were all one unit the 13/12  we can observe that one of the three occurrences  are two units to the other two being only one. Hence we need to add tones so that all the 13/12 are 2 units in size. This is designated with a circle with an arrow from side to side which is carried down and counted in determining the other intervals.

A rather odd thing happen though as when we reach down to 11/8, we can see that the 12 notes up to that point do form a constant structure,  but the 11/8 is only 4 units is much too small as the smaller 4/3 is 6 units. While one can have a bit of an overlap on range, we instead fix this oddity by adding two tones in the large gap to make it at least the same number of units as the 4/3. Since the idea was to have possible repeated tetrachords the pitches chosen to be added were ones that were a 3/2 above or below tones we had. There are other solutions one could pick.
Posted by Kraig Grady at 11:55 PM 2 comments: