Terumi and I will be playing at what promises to be an interesting art opening/happening. If in the Wollongong area, a good time to catch us.

From Artaud to Partch 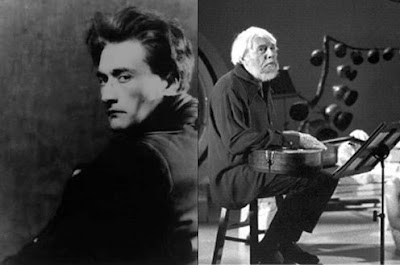 Quote from Artaud's 'The Theater and Its Double' (p.95 of my Evergreen book edition)

"MUSICAL INSTRUMENTS: They will be treated as objects and as a part of the set.
Also, the need to act directly and profoundly upon the sensibility, through the organs invites research, from the point of view of sound, into qualities which present-day musical instruments do not possess and which require the revival of ancient and forgotten instruments or the invention of new ones. Research is also required , apart from music, into instruments and appliances which, based on special combinations or new alloys of metal, can attain a new range and compass, producing sounds or noises that are unbearably piercing."

Elsewhere Artaud talks about them being of human size and dimensions.
Partch must have found himself if pretty full agreement with this, except for the concentration on metal. Still many of his percussive instruments were more than capable of being piercing. If would have been interesting if the theater community would have picked up on his work before the music one. Probably the development would have been of little difference. In fact his work still exist as theater secondly even though he was on the forefront of those who took Artaud and ran with it. He still deserve more notice from this direction.
Posted by Kraig Grady at 9:21 PM No comments:

Artistic fashions/trends as a whole

I really have never understood movements especially from the inside out. From the outside, they can be greatly entertaining. Not so much if one has to or feels forced to participate to be legitimate. For the growth of an art, the last thing that is needed is everyone investigating the same idea, and even more so for so long. Imagine all the poets in the world congregated at the same bluff and each writing poem after poem about the landscape. Sure a few would bring something unique. It does seem though a bad idea considering all the other bluffs in the world that are being ignored because of this. More often the bluff seems arbitrary if not shallow and/or a trivial choice. We find little out about a forest by everyone taking the same path in. How many pictures on flicker are needed from the same spot. Such situations resemble prisons.
It is not a matter of individual ego. It is just more expedient to have many people investigating many different branches that the present has unveiled. Some will naturally find themselves drawn to some like areas but not everyone in a niche and/or its pseudo-opposite. The more paths taken seems the best way for a whole art to grow wider, if not also upward.
Posted by Kraig Grady at 12:29 AM No comments:

More meanings of the 108 secret Anaphorian signs that cannot be shown
62. The path that is apparent only after much time and reflection.
63. When a crystalline formation informs an array of thoughts
64. That prophesy attained through grasping the waves of balance between opposites.
65. What we call and identify as personal guides
66. What is separated to be reconfigured into a better bond
67. The most individual trait that is most useful to others.
68. The study of the sparks that lead to an awaking from an oppressing hypnosis.
69. A relentless force set upon working on that which has been spoiled.
70. The pleasing glimmer at the end of a task.
Posted by Kraig Grady at 1:22 PM No comments:

Email ThisBlogThis!Share to TwitterShare to FacebookShare to Pinterest
Labels: meaning of the 108 secret Anaphorian signs that cannot be shown

Probably the most important composers collective and/or communal music making organization (well more than music!) on the globe at the moment. anything but your standard Balinese Gamelan.