Diamonds, Lambdomas, and Mt. Meru: The Return of Sacred Objects to a Secular Landscape.

Today, as never before,
we are witnessing an opposition
not between art and life,
but between sacral and secular spaces.
-Ilya Kabakov

In the process of my wife, Terumi Narushima working on her book on Erv Wilson's Tuning innovations, the subject of the Partch's Diamond and its origin have come up. What strikes myself is that how this structure seems to have been reawakened in not only Harry’s vision even if through Mayer, but the others to as close relatives. Spontaneously they appear in others such as Novaro (in the same year as Partch, 1927), but also Schlesinger too once one scratches the surface of her subharmonic scales sharing a common tone.  That all this rediscoverering would happen within a few brief years after 2000 years is uncanny and could be seen almost as if the structure had a life of its own. In its former context it was used to please the gods or to represent the celestial clockwork or even as a reflection of political structure.  This Lambdoma returns, but not in the context of an object to be worshipped, but as a something that nevertheless is once again in communication with our secular world. It is within this contact and communication that Partch deserves credit for placing his work and vision. His rituals do not worship these objects, but nevertheless places them within the conversation throughout his own aesthetic objects.

Erv Wilson firmly explored many of the geometrical properties of various organisations and while publicly he would not attribute anything extraordinary about them, he would always point them out when he ran across them. One of the most common mathematical figures he would return to,  or maybe uncannily repeatedly returned to him was Pascal's triangle which was known in  India where it was discovered 1000 years before Pascal it was known as Meru Prastara.
His first notice of it was in its relationship with his combination product sets. Later he appears to be the first to investigate the additions of the diagonals of Mt. Meru beyond the one known to produce the Fibonacci series. Here he found scales that reflected the practices of various indigenous music that some now found a way to appear in their own rituals.

Later I was fortunate enough to catch and point out to Wilson that Novaro’s series coincided with a reseeded triangle. From this he saw how Mt. Meru was tied to both the Lambdoma and the Farey series. The latter is imbedded in his scale tree, his reinvention of the Stern-Brocot tree. All this represented in the chart shown.

This series starts with the numbers 0/1 and 1/0 from which he described as possibly divine numbers but would not say or define further. One might wonder like myself if they are the infinitely small and large respectfully.  Then is the 1/1 like the "mesocosm" between these infinities. Hence why I have preferred to call my music Mesotonal.

Our relationship though is not in worshipping these structures even though they are probably worthy. They indeed act as forces often universal and beyond our control, even more so to surpass. Attempts to play these megastructures have proven less satisfactory than the material that rest upon them. Thus here they communicate and inform us at a distance  and there is good reason to listen.

It didn't take long for a non fatal but extremely debilitating virus  to sweep and fan wide spread panic. " I was just filled with nausea and feelings of vision of no future. I felt stuck with no motivation could no longer eat, especially any food that hadn't been tried before" reported one citizen hit with one of  the worse cases . Without any clear cause, rumors was that finally the island was under attack by hostile forces. Finally it was found that the source lie in an old abandoned mission  recently occupied by followers of La Roche  who seemed to have entered the country illegally. Within the make shift headquarters lie handouts as well as material belonging to a Schiller Institute with plans to launch a variety of other regressive virus. It was found in fact that the sounding of 432hz was having effects of nausea and since the closing of the institute under its strong anti-missionary laws and the removal of the devices sounding 432, Health and progress have returned to the Island. Still the mere mention of the frequency has caused almost instant relapses of nausea.
Posted by Kraig Grady at 7:05 AM 2 comments:

I had recently replaced my missing copy of Harp of New Albion by Terry Riley and decided to lattice out the tuning which i guess many might have already done. It is interesting in how La monte uses 7 limit intervals to approximate 5 and here we have Riley doing the opposite with the 16/15 over the 15/8 7 cents shy of an 8/7. Riley's use of the tuning is interesting also in that he never uses the 1/1 of his tuning for the tonic, albeit the D of 16/15 could have been also a good choice for the 1/1. Anyway in the context of the pieces it shows how far one can go into new territory with a relative simple 5 limit. I like the choice of the 64/45 giving him two just major scales which he seems to avoid using more than using. If you tuned the row with 5/3 , 5/4 and 15/8, and decided keep it in the same relationship wit h3/2 and 9/8 by lowering thise too, the scale would coincide with the Centaur Scale.
Posted by Kraig Grady at 12:17 PM No comments:

THE DOWSING POLES- New instrument member of the Meta-Slendro Ensemble 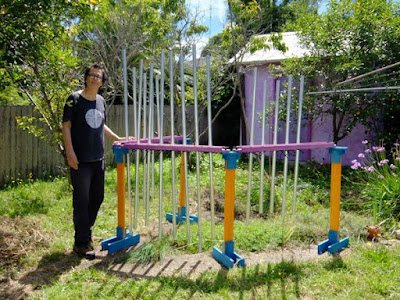 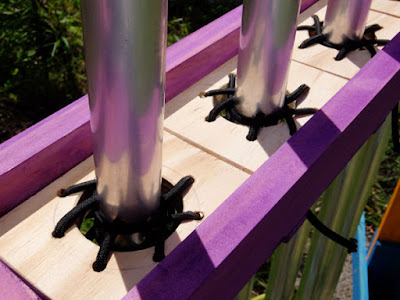 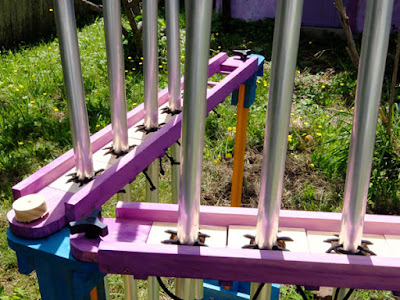 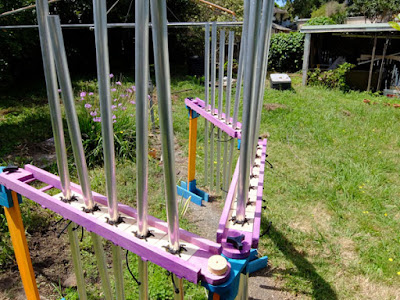 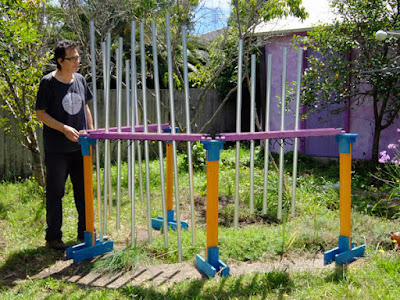 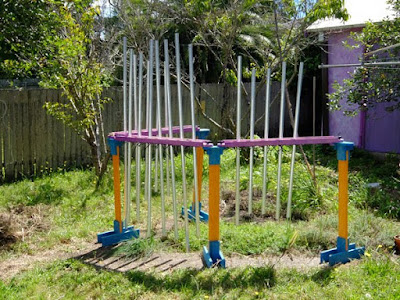 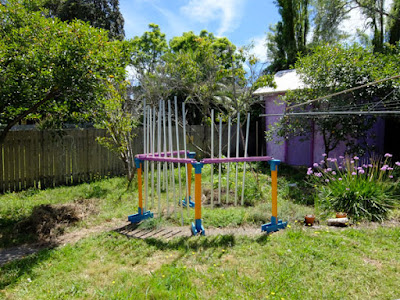 The Dowsing Poles This instrument grew out of a desire to have something like Tubular Bells to add to my ensemble of Meta-Slendro instruments. This tuning is anything but a conventional Slendro encompassing instruments using 12, 17 and 22 unequally spaced pitches in the octave informed by both traditional sources and recurrent sequence mathematics.
In order to realize such a Tubular Bell instrument and after much experimentation, I decided to explore the possibilities of suspending the tubes in the middle instead of the conventional nodes used on all my other instruments. This produces a somewhat similar sound to the desired orchestral instrument but with even more pitch, making the use of small distances between some pitches in the tuning much more practical and realistic.

Mounting the bars in this fashion was extremely difficult as it a point of balance, but wanted the tubes to be vertical in order to take up less space and easier to play. The present method of tying elastic cord seems to work well but am still not cutting the cords quite yet in order to see how it works after at least a few weeks. Hence why they can still be seen for the time being. This instrument is also quite modular being usable in any or all of the three sections and it allows the tubes to be placed in any order of which is shown here. The sections themselves are also flexible in being placed in a chain of any configuration here conforming to the only flat section on the Anaphorian Embassy grounds. This instrument will get it premiere at the Now Now Festival this Thursday night at 107 Projects
Posted by Kraig Grady at 11:27 PM No comments: