Another Timbre has released a work of Kraig Grady called Monument of Diamonds. Composed over a two-year period. It uses a 17 tone scale which expands upon the 12 tone merta-slendro tuning common to the Anaphorian shadow ensembles throughout the island. Grady considers it  one of his best and one of his most beautiful compositions and a useful sound work to everyone. Here is where you can get it along with two sound extracts.  https://anothertimbre.bandcamp.com/album/monument-of-diamonds . Cover artwork generously provided by Fred Tomaselli, 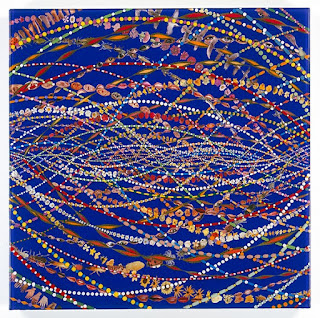 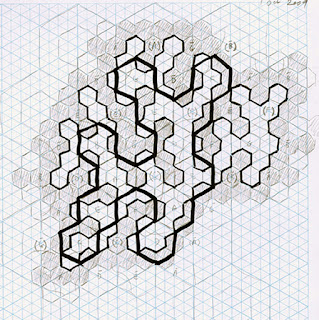 [moved here from other temporary blog] While discovered in 2009 by Joan Taylor, Llama Island has only recently come to the attention of the music world of Anaphoria Island despite it being within a two days southerly sailing distance. The indigenous inhabitants of that island have been aware since ancient times of how well their island 'tiles' space in an aperiodic way as the sole unit. One would be hard-pressed to find a single structure on the island that has not been decorated with it. The Anaphorians have been nevertheless more interested in using it musically. One of these has been as 'tonalities' on generalised keyboards. Another traces the shoreline around 13 hexanies where 7 hexanies are presented complete while 6 are incomplete having only 5 tones due to the missing of 3 internal tones. This pathway exhibits a bias that is musically useful to some in that on the map presented here the vertical appears 20 times, the diagonal down to the left 16 times and the one to the right 12 times. Thus one can accent some intervals more than others over the secession of 48 intervals around its shore. The island can be rotated in 6 ways or simply varied in 24 different ways by seeding it with the permutations of the tetrad that one uses to generate the hexany.
P.S. There is an additional 5 hexanies which exist in the negative; two of these are complete and 3 are incomplete with only 5 tones