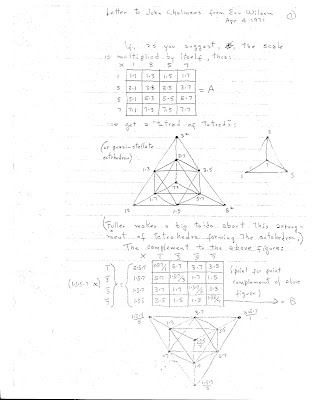 It has taking me a while to figure this out. The answer finally came when I was working on another problem. My brain is just not that linear.

Some time back while looking at Takemitsu’s application of Cage’s square root idea to Pitch, I stumbled upon its relationship to certain geometric structures of Erv Wilson. Pitch or duration doesn’t matter in that the structure is the same. I posted this to the Silence list that I was on at the time. I repeat the jest of that below.

This is the simplest example using only 4 durations. This gives us a good visual representation as to what happens with more complex examples. Here is the resulting square using A B C D to be what ever you want.

Now compare this with this excerpt from one of Wilson’s letters to John Chalmers found here
http://anaphoria.com/CPStoC-pt1.PDF shown above

One has only to replace the number by the letters.
What interests me though is the second diagram on this page.
Which shows a possible variation of Cage’s square root idea in reverse with each successive element having the reverse relationship above. To make this square, one uses the complementary elements not included in the original. This is what i had missed despite being right there in front of me.

It is interesting to observe where the two intersect which he does on the next page. 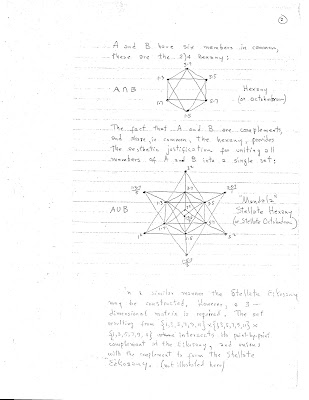 More often than not such a form is used with more elements. With 6 elements [here using the first 6 odd numbers] we can see below what happens as a like wise inter structure and its complements. 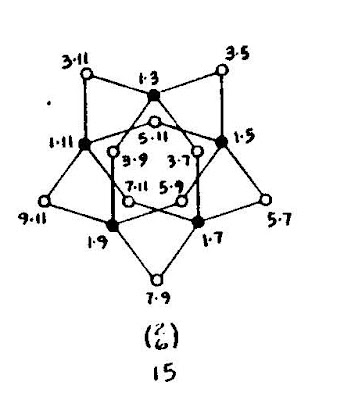 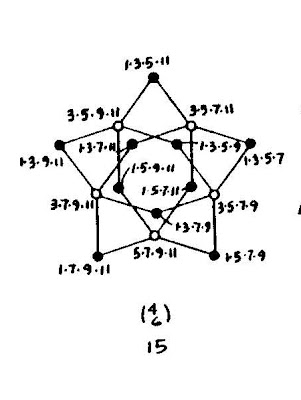 The thing about the set made by the intersection forms a cycle and makes it easy to proceed to the next element in a smooth fashion. same with the other ones i mention later.
There is no reason at this point no to consider the combinations of 3 out of 6 and if we look at those points where it interests with it complement we get the Eikosany. One of Erv’s Favorite structures. Which you can find it the article linked above.

I had a dream two nights ago where i had my Meru bars in a pentagram which i post next. Perhaps my mind is more linear than i thought.
Posted by Kraig Grady at 11:38 AM No comments:


Thanks to Albert Ortega for finding this
Posted by Kraig Grady at 10:09 PM No comments:

It is often easier to talk about someone else’s work than one‘s own. Here I can do a bit of both. Rod Poole and I ended up sharing an interest in microtonality that moved from my introducing him to the field to him as a friendship as a shared partner of similar concerns, questions, and often difficulties. We hadn’t known each other very long when I lent him a 12-tone guitar tuned to my centaur tuning (pictured in red). It was this tuning that became his point of departure, which is illustrated in this picture.

Later Rod shared living in the house with Erv Wilson. Something I had also done twice. It has to be one of the most highly concentrated learning environments one can find one self in. I provided both the knowledge and tools he needed to find what suited him to create his own palette. This is one of the great gifts of working with a teacher like Erv Wilson.

The process I find interesting mainly in that it has a contour that resembles my own, possibly it is universal. Rarely does anyone build directly on previous paths. Often one backs up to some point first and venture in a different direction.

In our case we both worked with larger number of tones and found our self pulling back to less. Rod in turn took what he would always tell me as ‘the best 7 limit 12 scale for the guitar, period’, (something he was more sure of than me) but dropped all the 5 limit intervals. [These are the hollowed red dots in the diagram]. La Monte’s tuning brought his attention to the possibility of dropping 5s for higher limit possibilities. He preferred to add 11 and 13 over 7s though. He was not one to waste time on over explored territory. Originally he added a 17 and a 19 harmonic, I think to try them out. He felt though how the instrument felt under his hand was a prime concern, and these added more problems than he gained for musically). His tuning is the solid red and black notes together. He had 19 tones originally after toying with 22 I believe, but pulled back to 17. All after taking my 12 and keeping only 8 of 3 and 7 limit intervals. I myself ventured out to 31 tones before pulling back to 22.

Those who know tuning might say is quite a distance from where Rod started to where he ended but he preserved the consistencies in the tuning. When I saw his notes, I smiled recognizing him being a student of Erv, there is no doubt of this.

There is more though. His frets ran straight across and he did much to explore different open strings tunings, as this is something he saw as the guitars strong point. Besides tetrachords he liked finding those close intervals such overlapping of tunings can provide. Likewise the harmonic spacings natural to the guitar molded by such overlaps. We have nothing on what he did with open string tuning in detail for his own playing outside the bowed guitar work. I know that he would tune strings 7 limit intervals away from personal statements he made.
What other push and pulls happened on this level before and after we might never know.

Both are music are scale based. Presently I pulled back to a 12 tone tuning that pushes the nature of what a scale of this number can be can be and remain so. This tuning, a Meta-Slendro based on Wilson’s, I have tune out to 22 on a different instrument, but I find that it loses something by having this many tones. For contrast I have another 9 tone ( which I had taken out to 16 tones) that uses many of the intervals that I the other lacks. It kind of plays ‘Pelog’ to my Slendro. Less tones need be no less adventuresome. One can explore all the ways a particular pitch can interact with all the others. While there are those venturing forth by just simple harmonic relations, letting harmony lead the way, melody and scale can also lead . In this situation harmony can develops more on the lines of ‘pandiatonic thinking’. By this, the free use of tones within a scale as opposed to the free scale developed out of harmony. One need not have to go back the way one came, there is no problem jumping from one point to the next. These were also concerns of Rod’s.
Posted by Kraig Grady at 11:00 PM No comments:


Thanks to Phillip Gelb for this
Posted by Kraig Grady at 1:18 PM No comments:


Thanks to Warren Burt for this
Posted by Kraig Grady at 2:05 PM 1 comment: