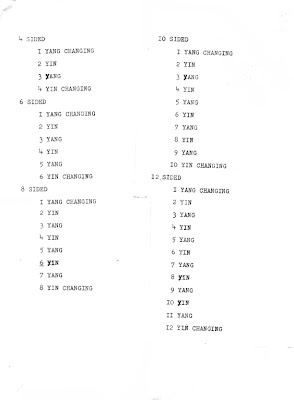 The man replied,”Things as they are,
Are changed upon the blue guitar.”-Wallace Stevens

I have a small blank black book where I have kept a record of practically every I Ching hexagram I have thrown since 1977. Perhaps I am somehow deceiving myself, but every time I have thrown it, it seems to make uncanny sense. More than once when it seemed to stray, I have found I tabulated it wrong. It is more than the traditional method too. I use a variety of multi-sided dice that I pick and choose from, depending on the subject. The configuration attempted to coincide with the probability found in the yarrow stick method. Why did I pick dice? It seemed to fit my (post) western concept of chance. Las Vegas. A place I loathe. but where the power of chance is worshipped.
Funny thing though when I have used a computer to throw the I Ching ithey NEVER seem to fit. One wonders whether the programs are all defective or ‘limited’ in someway or there is more influence one puts into the results than one realizes when going the corporeal route. Perhaps my ‘attitude’. Tarot, which I have less experience with, my experience has been pretty much the same. I suspect some aspect of randomness is intangable.
Musically I have used random methods primarily when I was investigating the nature of inversions of chords. To sustain a chord on some of my faster decay instruments I would ‘randomize’ the members of the chord, learning that it worked better to play the extremes less often with the middle more. I am sure that what I do is less than what a mathematical producing might give me, yet musically the result fits as good or better. But there is an interesting symbiotic relation going on here that I think could and should be explored more. What I am doing in these instances is only because of what I have heard machines or methods do. One could say I am informed by these random generators. As there are different random processes, it seems that they each could be used as an exposure to activate similar activity within a performers ourselves. To some extent I am sure this has already happen. One wonders if a Feldman could have happen without the input of his friends exploring various random applications musically and also visually. Intuition relies on what it is presented with. It seem the process could go back and forth.
It partially leads me out of a dilemma I was having.
“ What is the difference between a piece that uses a random method and one that says it is, but doesn’t”. One could put all types of other things to replace random to be fair, but I think I made enough problems with others asking these types of questions. There is still the aspect of partisan attitude associated with method and process that becomes meaningless if one cannot tell one realization from another. We don’t need such emperor clothes, the phenomenon is or should be enough
We can see that the process can be much more interactive with other processes in a deeper sense than when one thing literally mirrors another. Our tools can inform us and in turn we can inform them.
Posted by Kraig Grady at 7:36 PM No comments:

Email ThisBlogThis!Share to TwitterShare to FacebookShare to Pinterest
Labels: I Ching, randomness

Original footage of the 'first contact' between Papuan highlanders and Australian gold prospectors in the 1930's, together with reflections from surviving participants on their swift introduction to Western colonialism.
Ripped from the DVD "Indigenous Resistance in New Guinea" made by Solidarity South Pacific: www.eco-action.org/ssp - respect!«

Thanks to Carl lumma for finding this
Posted by Kraig Grady at 3:15 AM 1 comment:


thanks to Taylan Susam for finding the first of these. The following i found of great interest

Posted by Kraig Grady at 2:39 AM No comments:

Not all instruments are equal in their flexibility. Compare what can do with a piano and finger cymbals. I have a wonderful recording of a solo of the latter by Madjid Khaladj. Here on Tombak

Human beings will always be able to make music out of just about anything.
The relationship with instruments and people works both ways -each dictates what the other will do. Often time a defective one will result in an artist exploring just that defect. Keith Jarretts busted electric piano key on Miles LIVE/EVIL became the whole focus of the song as Jarrett first circles around it then drones on it. I have seen Chris Abrahams do the similar things on a “bad’ piano with finding some unique chord/timbre only available there at that moment.
Still such an instrument offers much choice in variation in sound.
While it is wonderful to see so many new instruments one would hope we can recognize the ones that offer more than one sound or timbre, one that allow the artist somewhere to go and discover beyond the immediate. It needn’t be complex as even set of bowls tuned by water gets one a broad range of expression. Often we might see an individual who no longer uses an instrument in ANY conventional way and I remember Jim French questioning why they just make an instrument that does that to start with and then venture from there. It is a good question.
What we need are instruments we can continue to explore on, not hem us in to a sound or two. Conventional ones have their own history and shouldn't be avoided. In fact how far can we get beyond variations of these great models?
Posted by Kraig Grady at 3:37 PM No comments:

Email ThisBlogThis!Share to TwitterShare to FacebookShare to Pinterest
Labels: instruments

It seems that in any form of communal music, scale and/or scales offer more advantages than disadvantages. I was reminded of this at the first rehearsal of a shadow play. Terumi responded how forgiving the scale on the instruments was, as if one could not hit a ‘wrong note’ yet assisted with what one wanted to do. Such was the hopeful goal when picking it years ago for use with this medium. It had to have a range of expression. So the overused generic harmonic series would not work. ( I don't think i could stand another piece on the harmonic series, especially on C)
One possibility is scale where all intervals are basically the same dissonant/consonant factor to each other. Otherwise one is working with tendencies require special handling either to resolve or avoid resolution. This allows any note to be used with any other and harmony often resulting from a combination of melodic impulses and/or doubling. Such scales are common to Africa and Indonesia, places where communal music is might be the most developed. Perhaps a good pathway is not to go outside of the great knowledge contained within these musics, but to proceed deeper within how it is put together. On the other hand if this is where we are going, the atomization of ‘sounds for themselves’ seem the foreign to where we want to get to, or is offering little in itself out of hand.
Another aspect of scale is the ‘orientation’ it provides. While this can be done by other parameters, A scale can provide an already mapping of terrain that is 'not' being included in what is being heard at the moment. We needn’t go back to 5 and 7 tone scales even though that is an area I don’t think has been exhausted. Even Coltrane returned to such material on more than one occasion. One can take scale also as a point of departure that can be expanded upon yet remain as dynamic.
One more aspect of scale though is in can creating an environmental ambiance by it very nature of its materials. By its own internal interaction with itself certain scales will carry further than others in distance. Others can be compared with placing of stones is a brook. One can create patterns of waves that are a delight to the eye. The same can be done with sound waves. [ one can add one more and it all falls apart into turbulence. One reason why I shy from combine tunings, especially 12 ET with my own. It undermines the very nature of my tuning to interact with the environment. While I do think it is possible to combine certain scales (not all) , we know too little about this at this time, the physics is already highly complex with even singular tunings and we are far from exhausting those possibilities.]
Posted by Kraig Grady at 10:03 PM No comments:

Email ThisBlogThis!Share to TwitterShare to FacebookShare to Pinterest
Labels: SCALE

Problems of Intent and Conceptual art/music

This originally was written as a response to a blog entry here
http://audibleaffinities.blogspot.com/2009/04/social-music-with-brandon-labelle.html
but since my comment would not post, i expanded upon it here. In the last paragraph he poses some good questions. i get stuck before i get to those.

To depend on intent or even conception appears problematic in that one must assume the transition from a mesocosm, say an intermediary realm of visionary imagination from which the conception appears, into the corporeal is possible without any transformation. The implication is then that they are completely alike in syntax for this to be possible. I find this doubtful even if we find them inseparable. Change occurs and these type of changes also deserve reflection. Stockhausen, who to many represent the non reflective creative spirit run loose appears to not be so. If one reads his comments about his 'from the 7 days' works, one observes that he did not shy away from reflecting that the 'results' were often different than the 'intent' of the piece. In fact he quite celebrating what he in turn learned by how these ideas manifested. Concept requires an understanding of what happens when it is enacted. Otherwise we risk degenerating into an idealistic dictatorship of 'spirit over matter' not far from the realm of religion.

The relationship between concept and realization seems best when a marriage of the two. Each adding to the mix and mutually reflecting upon their own interaction. Hence one small step toward an 'inner commune'
Posted by Kraig Grady at 11:41 AM No comments:

Charles Olson film-Polis is This 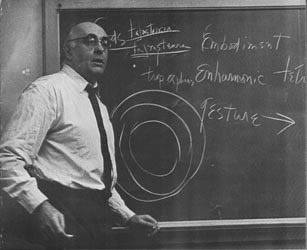 I could have embedded all these but i thought it best just to provide a link to the source. A wonderful documentary on Olson that deserves more attention.
http://www.polisisthis.com/watch-now.html
While much has been said about his relation and influence on musical improvisation. I think his work has implication for Intuitive music in general. Not to mention looking at the possibilities of musical passages as being related by their 'energy' as opposed to ' technical systems' that often fail to be comprehensible. It surely leads us back to a phenomenological experience of it.
Posted by Kraig Grady at 11:16 PM No comments: