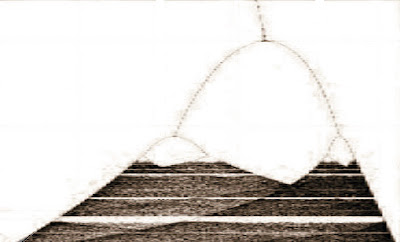 What is believed to be the oldest depiction of Anaphoria by a foreigner arrived yesterday from Japan accompanied by the interim ambassador R. Tomasula. Carbon dating places it at over 3500 years old and in pristine condition for a woodcut of this age. There has been much speculation about the arc between Anaphoria's two highest peaks as it coincides with many myths of this time as a connection that existed between two famous holy men who while never meeting seemed to provide the people with almost instantaneous dual proclamations.
It was known as the time of the great thread or bridge depending on which peak one is able to trace as the source of the story. Much to do as also been made about the actual curve itself resembling the exact proportions of some of Japan's famous bridges.
Posted by Kraig Grady at 6:24 PM

Email ThisBlogThis!Share to TwitterShare to FacebookShare to Pinterest
Labels: Japanese depiction of Anaphoria, threads and bridges